OriginClear Technologies is really starting to rock it.

From the second to the third quarter, Technologies revenue increased by more than five times, and its gross profits by more than seven!

At five figures, it was still much less than the million-plus that our Texas division brought in. But licensing revenues have a way of building up, so we believe that growth will continue to accelerate as we enter 2018.

"Water is more important than oil in the UAE. We are preoccupied by this major issue."

These were the words of Mohammed bin Zayed bin Sultan Al-Nahyan, Crown Prince of Abu Dhabi, speaking at the first Produced Water Middle East conference, held in his country on 12-13 November.

Our own Jean-Louis "JL" Kindler also spoke, and you can view his presentation here.

We showed that our technology is vital to cleaning up all that oil field produced water, while using the least possible chemicals.

Remember when we quickly removed all the Roundup active ingredient from a lab sample?

The chemical testing lab told us it was non-detectable. But that wasn't good enough!

So, we invested in a Liquid chromatography–mass spectrometry (LC-MS) system, which can take us way below one part per billion! 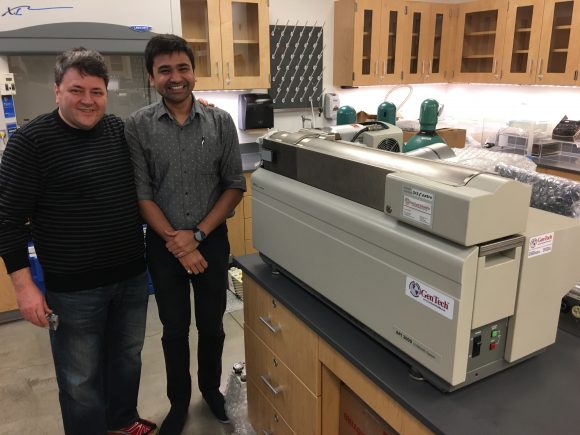 OriginClear supporter George B with Application Engineer Ayush Tripathi, next to our new mass spectrometry machine

All in all, it's a great time for our Technology Division.

Congratulations to Jean-Louis Kindler and Ayush Tripathi in Los Angeles, the Texas team led by Marc Stevens, and — in China — Stephen Jan and his crew!

And finally, if you're in the USA — Happy Thanksgiving!

PS: Hit reply now and I will get back to you personally, as I always do. But remember, you must be an accredited or foreign investor!