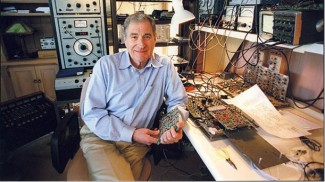 Ray Dolby is a personal hero.

Early in his career, Ray helped invent the videotape recorder.

He went on to invent Dolby Noise Reduction in 1965 (although he didn't file the patent until 1969!)

A billionaire American engineer and inventor.

CNET said of him, "Ray Dolby changed the way we hear sound."

The company never stopped innovating, and while Dolby Labs isn't a tech giant like Sony or Apple, the wide scale adoption of Dolby technology has changed the way almost everyone listens to music or movies.

Thanks to the leadership of my brother Nicholas, OriginOil will never stop innovating. But there is another way that Ray Dolby is our hero, and our guide: his business model.

You see, Ray never tried to build a "Dolby Radio" or "Dolby Receiver".

Instead, he licensed his technology widely. This turned his invention into a true industry standard, a household name.

That's our model too. Sure, we sell equipment — but only to prove that our core technology works. We hope to transform how companies get small contaminants out of huge volumes of water, quickly and without chemicals, and we want to do it through licensing.

It's not an easy road, and you can't wait four years anymore to file your patent! But we believe it's the right way.

Last week I showed you a photo of my brother Nicholas drinking pond water from a hose.

It's all part of our coverage of the team's adventures, in 109 degree heat, as they get the Permanent Showcase going down in the Coachella Valley, south of Palm Springs.

On the Big Biz Show a couple of days later, I showed a sneak preview, featuring, you guessed it, my brother drinking pond water...

It's a great show, and I urge you to watch it, and not just for my brother's fish pond water drinking caper!

In fact, in this show I told the licensing story that follows in Ray's path. Check it out.

Enjoy the rest of your week!