On Stage With T. Boone Pickens

Last week, I joined an "armchair conversation" with T. Boone Pickens, on stage at a conference. 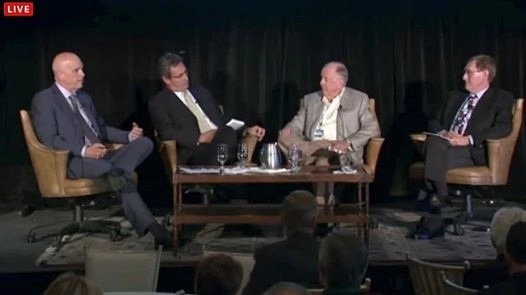 (Also you can view my presentation in our archive here.)

Was this an oil industry conference?

No, it was the AREDAY 2014 Summit, a renewable energy conference, held in liberal Aspen, Colorado!

How is it that a conference of green advocates listened with interest to a conversation about… fracking??

As you know, hydraulic fracturing ("fracking") is when you shoot 5 million gallons of water deep into the earth to break up "source rock" for the oil and gas locked up in it.

And these days, there is a great deal of opposition to the practice — right in Colorado, but also in California, New York and elsewhere.

And there was just as much opposition, right in this conference, where exciting new renewable energy systems were being reported on.

So, why the respect for T. Boone Pickens?

Renewable energy is already happening. We ourselves are working with several biofuels producers on the algae-to-fuel process.

Now the next challenge for renewable energy is SCALE - making things big enough. It simply takes years... decades, in fact, to get up to petroleum's level.

Meanwhile, in natural gas, as Pickens proposes in the Pickens Plan (www.pickensplan.com), fracking is providing a transitional energy source.

If we adopt the Pickens Plan for a "natural gas highway", Boone says that trucking fuel costs will be cut by half, and air pollution will be greatly reduced from diesel, as it already is from coal.

And so the best thing, he agreed in this conversation, is not to resist or stop the fracking, but to urge common-sense best practices on the industry.

And so Boone received a "Transition Pioneer" award at the AREDAY Summit.

My message to the oil industry

My own message was to embrace the water issue, be seen as a good neighbor and even one that provides additional water to drought-stricken farmers!

Especially since our spreadsheet showed that drillers can save 22% on the low side, and 80% on the high side, by recycling their water.

Sure enough, we are doing deals with innovators in oil and gas, now that we have the proven test numbers.

In fact, we have deals lined up right through the rest of the year, and I hope to tell you about one later this week!

Stay tuned, and enjoy the last of this great summer.