The above image is typical of concentrated animal feeding operations (CAFO) which have many issues relative to the environment, particularly manure management. Compounding those issues is the growth of CAFOs as shown in the chart below which shows the magnitude of growth of the CAFOs versus the smaller farms and hence the issues of manure management accompanying that growth. 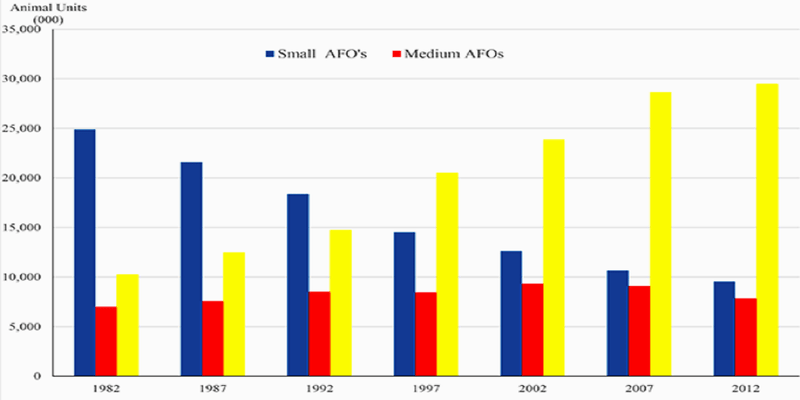 Because groundwater and surface water are closely linked, water pollution from CAFOs can affect both sources if one or the other is contaminated. Surface water may be polluted by CAFO waste through the runoff of nutrients, organics, and pathogens from fields and storage. Waste can be transmitted to groundwater through the leaching of pollutants. Some facility designs, such as lagoons, can reduce the risk of groundwater contamination, but the microbial pathogens from animal waste may still pollute surface and groundwater, causing adverse effects on wildlife and human health.

Spain’s swine industry is typical of many CAFOs both throughout the world and with all animals grown for food. For Spain, the world’s fourth largest pork producer behind China, the USA and Germany, this comes at a time when they want to double or triple their production capacity. With a major swine flu epidemic sweeping China’s pig farms and production shifting from colder climes, demand for increased production in Spain’s swine farming sector is at an all-time high. Most farm operators have plans to double or even triple hog farming in the next year alone.

However, they are hindered by ammonia saturated lands from a history of irrigating their fields with manure effluent. Strict EU imitations on the amount of ammonia effectively limits the amount of manure generated and therefore the number of swine that can be grown.  Most CAFOs in developed countries are also now governed by regulations that restrict how much manure waste can be distributed and the required quality of the materials.

Depuporc estimates that their proprietary system could limit annual nitrogen production by hog farms to 16 kilos per hectare, less that one-tenth the limit of 210 kilos per hectare per year that was established by Spain’s Royal Decree 324/2000.

Until now, the best solution was to store manure wastewater in lagoons and periodically pump out the water.  The high solids content water would then be screened, clogging filters and membranes, and used as the irrigation water.  However, this process did not remove the ammonia and other undesirable dissolved contaminants.  The solids were pressed into a cake. That is both environmentally irresponsible and expensive to farm operators.

The best solution is to treat the manure and manure waste water “on-line” beginning with a screening process, then a coagulation/flocculation process to remove all suspended solids and finally an advanced oxidation stage to remove the dissolved contaminants, such as ammonia.

In March of 2017, Spain’s Depuporc entered into a licensing agreement with OriginClear to incorporate our Electro Water Separation™ (EWS) and Advanced Oxidation™ (AOx) technologies into their patented swine manure wastewater treatment system. OriginClear’s EWS+AOx were determined to be ideal final stage for clarifying the flow of manure water and removing the ammonia.

A commercial pilot was launched to prove to Spanish pork producers the workability of the method and also demonstrate the potential breadth of this ground-breaking technology in action. Depuporc has succeeded in building a complete system that can continuously transform pig manure into a zero-waste output of fertilizer and clean essentially ammonia free irrigation water. 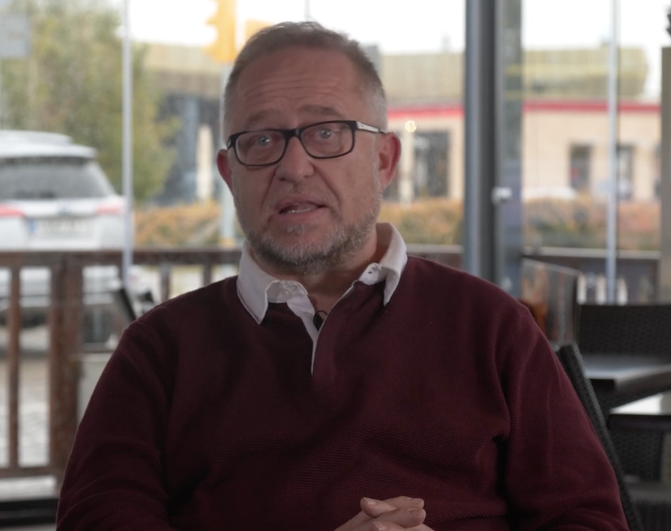 “Their only solution is to treat the manure for fertilizer and water reuse,” said Eduardo Chopo, co-owner of Depuporc . “This is where our patented system, which incorporates OriginClear’s technology as a third and final step, has been shown to reduce pollutants and also generate valuable fertilizer and irrigation-grade water, solving a major barrier to expansion for these producers.”

Depuporc’s 30 metric ton per day mobile treatment systems can travel to the hundreds of farms in Spain to prove the process and show the farmers how to process their lagoons into profitable and "clean" manure cake and clean water for use in cleaning and other farming chores. As can be seen in the Product Line chart on below, Depuporc’s standard offering scales up to 400 metric tons per day. 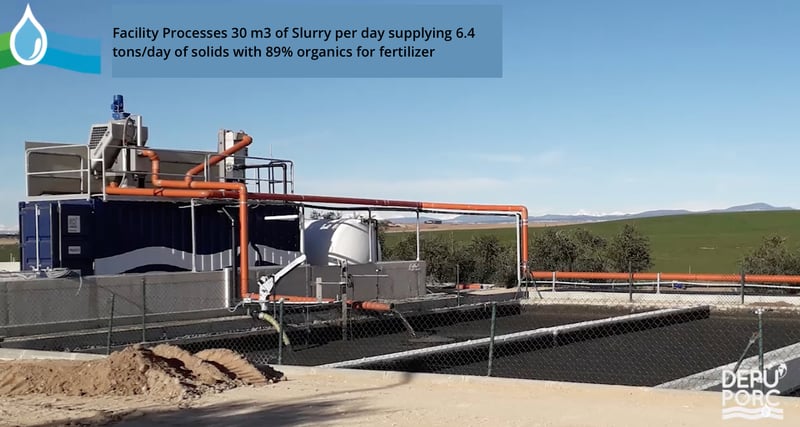 Depuporc's system, which incorporates OriginClear’s advanced water treatment technologies,
has been selected as one of 101 Spanish inventions to be presented at the upcoming
United Nations Climate Change Conference in Madrid! 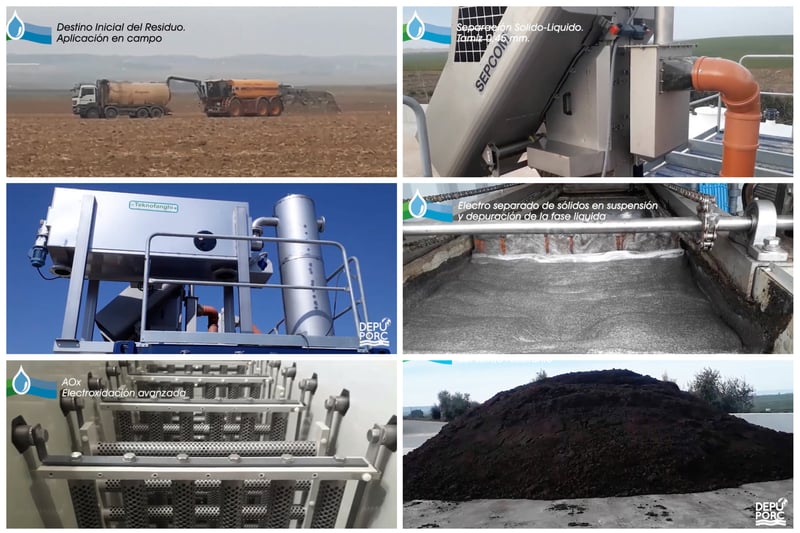 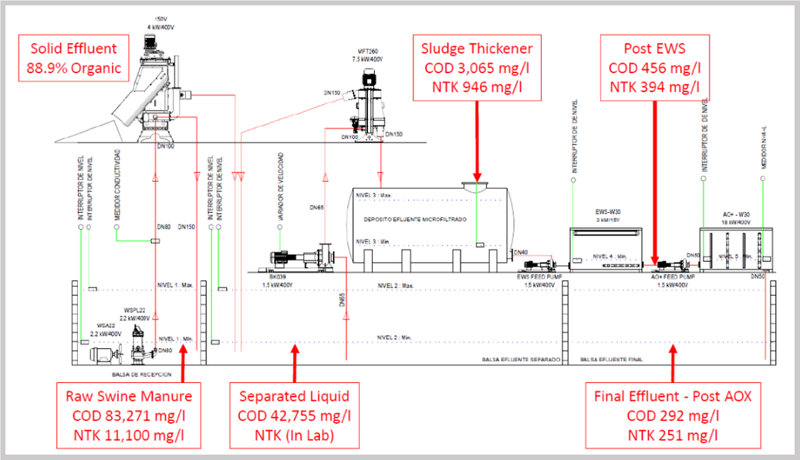 Spain’s swine production industry is very focused on animal welfare because it increases productivity. For example, with better conditions, piglet births can go from 30 to 34 per year, for each mother pig, or sow, a 13% increase in productivity. The dominant factors required to accomplish such an increase are feed regulation and quality, as well as animal drinking and cleaning water quality which not only improve animal hygiene and enable animal disease control, but also reduce water costs through reuse. OriginClear’s advanced water treatment technologies in this case, were proven to be the decisive game-changer.

Proper management of manure wastewater is essential not only to swine farming, but to the farming of other food animals:  cattle, diary, sheep and poultry.  All have the similar issues and must treat the manure for productivity and the environment.  In Spain, Depuporc and OriginClear have proven that their patented system is a cost effective and environmental solution.