They call them "Atmospheric Rivers", essentially rivers in the sky that carry vast amounts of moisture. Like a fire hose, they have bombarded central and northern California, repeatedly.

“We usually see three or four atmospheric rivers in a season,” Scott McGuire, a meteorologist with the National Weather Service office in Reno, told the San Francisco Chronicle. “We’ve already had 10. We’ve had so much snow to the point where it’s getting hard to measure.”

People are starting to complain. Too much rain! Too much snow!

Only 17% of the state remains in a drought — primarily in Southern California — the lowest percentage since 2011...

For the first time since 2013, none of the state is listed in "extreme" drought.

The new numbers represent a drastic decrease. Three months ago, drought covered 73% of California. One year ago, that number was 95%.

California’s Natural Resources Agency said Wednesday that the water contained in the state’s snowpack is 188 percent of normal.* 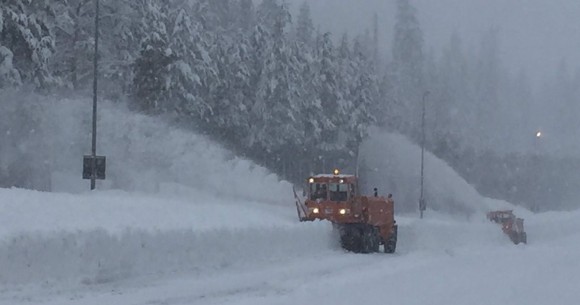 It would take years of heavy rains to recharge our badly depleted aquifers.

And... 80% of the rain that falls on Los Angeles still drains straight into the ocean.

The amazing rains of this season have given us a golden opportunity — to waste less water, to clean it up for reuse, to be wiser about how we use it.

We're working with smart, motivated people in water agencies — and in the petroleum industry — to help make this happen.

As promised, Bill Charneski and I plan met with water experts at the American Water Works Association's conference in Long Beach.

All I can say for now is... we had a number of very productive discussions. More to follow!

Have a great week.