A couple of weeks ago I reported on the amazing results of our aquaculture prototype in "The Photo That Will Shock You".

I told you that... "we plan to take this rig to a working fish farming site in the first week of June, for field testing."

Testing done, off to the site

After having worked all weekend, the R&D team is off this morning to test both aquaculture cleanup, and algae harvesting, at a site... well, I can't tell you where it is just yet.

Hint: it's not really very far. Here are our two test machines loaded up for the trip: (see it on Facebook) 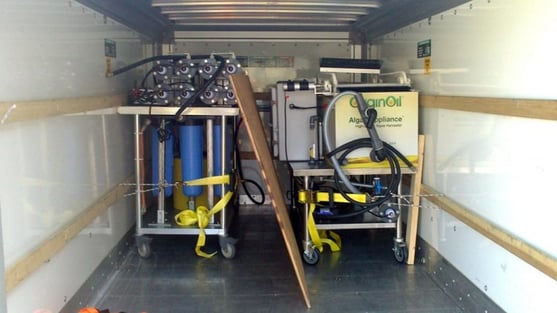 They're small but powerful: that aquaculture tester does at least 15 gallons per minute, so it should prove itself just fine.

It will deliver nutrient-rich water to that fish farm's algae pond, and then the Algae Appliance will harvest the algae. For the fish. Whose water we will clean, etc.

Here's the report from Andrew Davies, Chief Builder, from the testing done on Saturday:

The final testing of the Aquaculture unit was completed today. It is really quite incredible how effective the system is at removing ammonia and fecal matter. Nick and I had to dial the unit back considerably as we were preparing for the worse case scenario but were far too effective...

How effective IS this unit?

There's a term called "ORP". That's short of oxidation (or oxygen) reduction potential. It's how much oxygen is in the water to break down contaminants.

In other words, how clean the water is. It is measured in millivolts (mV).

Results: in the recent tests, our system took dirty fish farming water and returned it at 740 mV.

What does this mean? Look at the table below:

Here's another way to look at it:

That's the range we appear to be achieving.

What about swimming pools etc.?

So.... can we clean swimming pools with this technology? The answer is yes, it appears so. And that pool will be chlorine-free.

But... we are focusing for now on the $100 billion fish farming industry.

So good luck this week to Nicholas, Andrew and our new global sales manager for aquaculture, Leonard Velez!

Have a great week, too.