"JL" Kindler just came back from Asia with a half dozen big wins in the bag, including joining a pilot program for a "supermajor" oil company...

Here is a photo from the signing ceremony. Official news to follow! 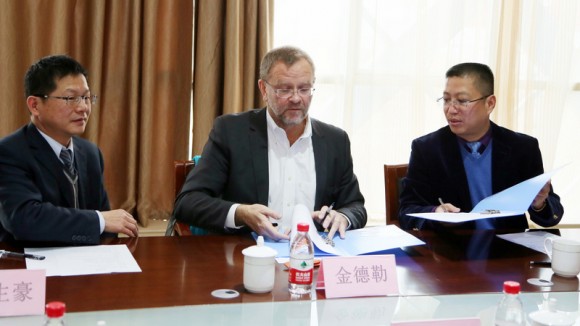 That's just five years after we first announced that we could...

"...remove 98% of hydrocarbons from a sample of West Texas oil well ‘frac flowback’ water in the first stage alone."

Was this a big deal?

Just slightly! As we said at the time, Greentech Media reports that energy companies pay between $3 – $12 to dispose of each barrel of produced water, implying a potential world market value between $300 billion and $1 trillion per year.

We adapted by taking our process into landfills, industry, and agriculture. We are now doing about $5 million a year in revenues from our technology and our work with water customers.

Last year we proved ourselves in the nation's most productive oil county, working with an industry water treatment agency.

You can read the study results here (PDF download).

This is attracting licensees and oil companies in the USA as well as Asia.

About the USA, I can say very little. But we are doing well, to say the least.

You know how it works in biotech. The years of research and testing in pursuit of that FDA approval... And then it hits.

Water is like that. It takes 12 to 14 years to get a new water technology adopted.

How do we speed that up? By finding the early adopters throughout the world.

And it's working, five years later!

We are getting the hits.

Have a great week.

Have you heard about our special list for accredited investors only? You'll receive occasional news about investments in OriginClear*.