Oil prices continue to fall. That party won't last forever, but meanwhile, people are driving more. Truck sales are up.

The more oil, the more water.

We like to talk about frack water, but the amounts of Produced water are far greater over the long run.

It's a tsunami of water, and increasingly, it's not being dumped, but instead treated, which saves the oil industry about $1.40 for each barrel of water (and they need those savings right now!)

The global Produced water treatment market size is estimated to exceed $8.0 billion by 2019.

The major factors responsible driving the growth of this market include the energy sector growth in Africa and the Middle East along with, increasing strictness of environmental policies.

Clearly, our market opportunity is alive and well!

There is so much Produced water that the oil industry...is really a water industry!

The oil industry is effectively a water industry which delivers oil as a byproduct.

In the North American onshore oil industry, on average nearly eight barrels of water are brought to the surface for every barrel of oil.

This produced water is often highly saline and contaminated by hydrocarbons: It is a hazardous waste which requires treatment, disposal and potentially recycling.

You could say that the oil industry is working to make water.

What is Produced water?

A great deal of water exists in (and below) oil and gas formations. This water comes up with the oil as Produced water.

And in the late stage of a well's life, drillers use water flooding to "float" oil to the surface. That's Produced water, too.

It's often cheaper to treat and recycle it than to dump it.

And treated, it could help relieve water shortages in drought-parched areas like California.

A boon to farmers?

Chevron has built an eight-mile pipeline to supply treated produced water to farmers.

Recently, when water prices on the open market skyrocketed to $1,300 an acre-foot, the price of the Chevron-treated water remained under $60.

An oil industry article by... OriginOil

Here's the striking cover of an article by our own Bill Charneski in October's issue of the respected Oilfield Technology Magazine.

The article explains how fracking can both reduce costs and help the industry be seen as a "good neighbor" by using less water. 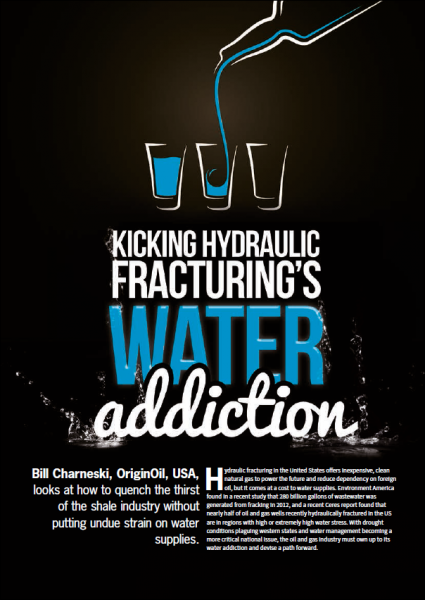 With the start of the new year, Bill is back in Houston making deals, and is off to the Middle East in a few days.

Meanwhile, "JL" Kindler is in China setting up our well-connected operation there. Then he's off to Malaysia.

It's nonstop deals. I'll be updating you as these bear fruit over the next few weeks.

Also, I will be giving you some good news (with photos) about our California Research Center.

In the meantime, enjoy the rest of your week!!