The President Votes for Fracking

President Obama just voted for fracking in the USA.

The bottom line: many of the nation's 650 coal plants will be shut down in the next fifteen years.

Only fracking can take the place of coal right now.

Solar, wind and nuclear can help, but the only immediate substitute is natural gas from fracking.

In reality, this Administration just directed a vast expansion of fracking in this country.

At the same time, there is a great deal of opposition to fracking in towns and states across the country.

California is just one battle ground, with tiny Carson near downtown LA an anti-fracking flashpoint.

Cleaning up the water can reduce the environmental cost of fracking.

The key is to get the cost of frack water treatment down. And our technology can do that, eliminating chemicals and potentially reducing the energy needed to treat the water.

And now the industry is listening to us, because they want to address that opposition to fracking!

If water has to be trucked in for a frack job, that's a thousand truck trips for each job.

A well can be fracked a dozen times. This is hard on lifestyles and roads.

And water is scarce in many places where fracking occurs.

Reusing the water can reduce both costs and truck trips, making everyone happy.

Oil wells can actually generate extra water that farmers can use for irrigation.

In the West, the water game is about who can get what from scarce allocations.

But the oil industry can deliver abundant fresh water from the extra water they generate!

On the 27th of May, we took our technology out of the lab and into the field.

Our premiere in Delta was a huge success... check out the video! 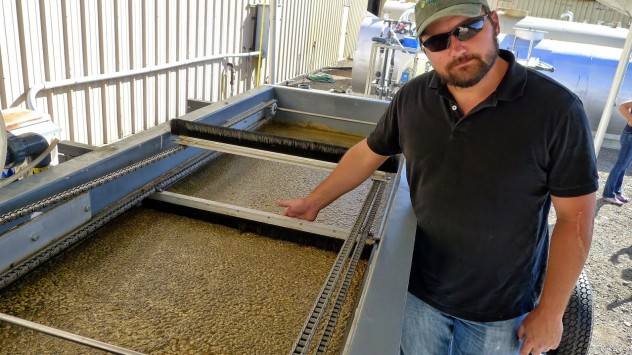 And the teams at ISI and TriSep: rockstars all.

Next stop Houston! THE SHOW!

Meanwhile, ISI is making sales, and at a at a waste water treatment plant in California, Pearl Blue Water is testing its OriginOil-powered machine...

Our prospective customers and licensees were waiting for us to deliver a demonstration-scale machine. The floodgates have opened.

On May 22nd, Merriam Webster added "frack" to its dictionary.

What do we think?

End of debate? I hope so! We're getting on with it.

Have a great week!