This chart says it all. It's the daily price of U.S. West Texas Intermediate (WTI) crude oil blend as of yesterday's close. 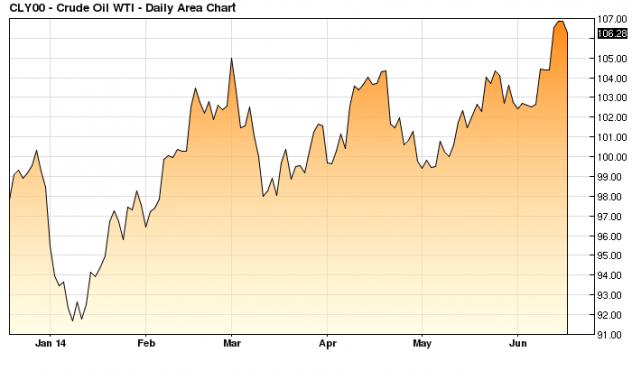 It seems that the world was expecting Iraq to grow its production steadily. So when the country with the second-largest proved oil reserves in the world began to literally fall apart last week, prices spiked.

But the fact is, the price of crude has been going up all year. And even in May, a respected analyst predicted it may hit $147 a barrel over the next ten to twenty years.

Combine that with the EPA ruling early this month that will cause many of the nation's 650 coal plants to be shut down in the next fifteen years, and you have a perfect storm for fossil fuels.

Hydraulic facturing, or fracking, is the only technology that can respond fast enough to feed this huge increase in demand.

That's what On Point's Tom Ashbrook called it on his show last week. Listen to it here, it's fascinating. Here's the intro:

The meltdown in Iraq right now hardly makes the Middle East look like a calm energy source.  And the President’s big push for lower emissions at home will not be met by solar and wind alone.  Far from it.  This country is poised to go after a lot more domestic natural gas.  And for better or worse, that means a lot more fracking.  Call it mega-fracking.  Many Americans have not taken onboard just how mightily this industry is gearing up for further vast growth, from well-head to transport to processing and pipelines.

How much oil is there? Here's a compelling graphic from the Growth Stock Wire.

...there are roughly 6.1 trillion barrels of oil remaining. If we can recover just 5% of that oil (we're getting 4% to 6% out of the Bakken today), we'll get about 300 billion barrels.That's more oil than the U.S. produced in the history of the oil industry AND all the oil reserves we have today.

What this means for OriginOil

The fracking boom is on its way. It's now "mega-fracking".

There are environmental concerns galore, but for us the main focus is water.

Water isn't cheap, and drillers need to reuse the water that comes gushing out of their wells, continuously and without using chemicals.

Our technology does that very efficiently, and the industry is taking notice.