The Ennesys team was hard at work when I showed up at their offices near Paris recently. They paid no attention to me at first - they were intent on making a major deadline.

Here I am with their CEO, Pierre Tauzinat, soon after the team met the deadline...

"PROJET SPRING" is the code-name for an ambitious half-million square foot (40,000 m2) construction project that will use algae for energy. It is being underwritten by a world-renowned French commercial builder.

And yes, that builder is paying Ennesys six figures US for the initial project development, with much more to come as it moves into detail stages. 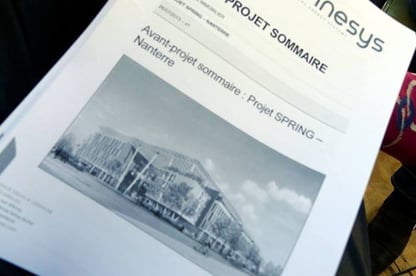 (Here's my snapshot of a project draft).

Project SPRING is just one of SIX major revenue-generating projects that Ennesys is planning or executing, in France and elsewhere in the world.

There's even one in the Maldive Islands, where rising ocean levels threaten the country's very existence.

What this means for OriginOil

This revenue is good news for the urban algae sector, which Ennesys leads. As a startup it will continue to need funding; getting revenue is great for its prospects.

For OriginOil, this is an investment that we believe will soon show major valuation multiples.

And since Ennesys is our showcase in Europe, it is great to know that they are continuing to show results with our technology!

The next day, Paris set a 147-year record daytime high: 41 degrees Celsius, or 106 degrees in the shade!

Buildings clad in algae on their rooftops and outside walls can not only make their own energy, but they can run cooler. That will make them increasingly essential in these hotter times.

PS: Interested in scheduling an OriginOil demonstration in the United States or Europe? Just email sales@originoil.com.