Last Monday, this article in EnergyWire got my attention.

How much running room? Try five trillion dollars in the US alone!

Here's the quote that stopped me:

Consulting firm PricewaterhouseCoopers expects U.S. shale alone will need $5 trillion of investment in the next 20 years, mainly in the upstream and midstream sectors.

It seems that the new shale techniques (fracking, horizontal drilling), are going to be applied to virtually every well in America.

Our job just got a lot bigger.

It's the end of easy disposal.

The industry will have to invest in extensive re-use and purification. Clearly, that will make up a significant piece of the five trillion dollars it will invest over those twenty years.

Can Cleantech keep up?

We're busy in shale, so five trillion dollars is no threat - it's an opportunity!

But last Monday was also the first day of the Ernst & Young Cleantech CEO Retreat near San Francisco.

So the first question I asked at the Retreat was: will this crowd out investment in Cleantech?

The answer was, yes. But there is a saving grace: shale is expensive. 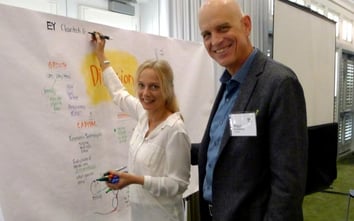 (As we debated, Graphic Facilitator Paula Hansen plastered her impressions as murals all over the room. Here she is.)

Meanwhile, at this week's Algae Biomass Summit, our own Jose Sanchez showed an enthusiastic crowd how you can make algae-based fuel for just $66 a barrel!

You can read his presentation here.

In this photo he's manning our booth at the Summit...

More next week on how our teams did at the Algae Summit, and at SPE, a leading oil and gas conference.

Hint: they did awesome.

Have a great weekend!

In our press release last week, we announced that Algae Enviro Engineering of Singapore has adopted our technology, and that is certainly true.

We also reported, “Wildlife Reserve Singapore, which owns and operates the Singapore zoo, river safari, night safari and birdpark, recently began to use AEE Spirulina Probiotic Premix. And in a recent trial, the weight of Japanese two color carp nearly doubled in comparison with conventional feed, when given High Spirulina Probiotic Aquafeed over a period of five weeks.”

We just want to make it clear that the trial of Japanese carp was not done at Wildlife Reserve Singapore. Additionally, the park names should be listed as follows: Jurong Bird Park, Night Safari, River Safari, and Singapore Zoo.

We apologize for the error.