At some point in his career, Philanthroinvestors® founder Ivan Anz realized he was just “investing money for money”... 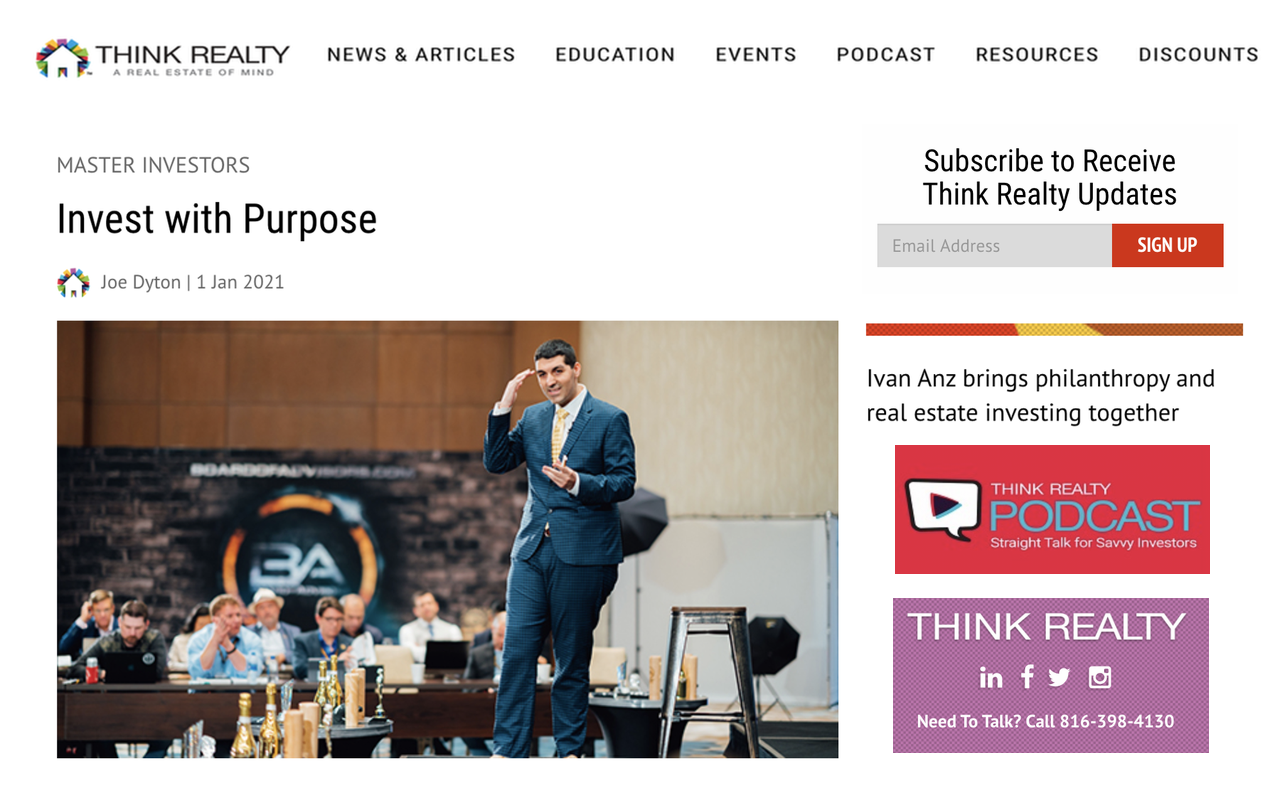 Philanthroinvestors® has expanded the arenas in which it encourages philanthroinvestments™. These additional industries include water, air, animal protection, the arts, food, energy, literacy, wellness and building stronger structures to prevent earthquakes disasters. Like with real estate, through Equity & Help® people can work with Philanthroinvestors, Inc. and invest in these efforts to help others through improving the planet while they grow their capital and get recurring cashflow.

In 2019, Philanthroinvestors® discovered some hard facts: 6,000 kids die every year from water-related diseases and 80 percent of water is released untreated worldwide. The company realized immediately that saving planetary water was going to be the next endeavor for them to explore and support.

“We started looking for a company to support our Water Philanthroinvesting™️ initiative, and officially in 2020 we partnered with and licensed our brand to The Water Company For The New Economy™️, OriginClear®️ which is helping Water Philanthroinvestors®️ finance a new breed of Waterpreneurs™️, all while potentially growing their capital and getting recurring cashflow,” Anz said.

“Meanwhile, these Waterpreneurs are creating a six-figure business that can purify a million liters per month or more, using OriginClear®️ technology. This is how we will get many people helping to change the state of water in the world and that is what matters most to our Water Philanthroinvestors!”

“There are one billion illiterate individuals in the world,” Anz added. “All of these problems are the bottom of the iceberg that we are not seeing and not touching with enough energy and is directing us towards the most expensive and problematic industry in the world—the health industry, which has more than 95 percent of the world’s population with health problems.

I realized the problem here is we are trying to send someone to Mars, instead of looking at how to properly manage and administer a planet. What if instead we use our minds and resources to conquer this planet and life?”

Going to Another Level

Questions like those made Anz realize that Philanthroinvestors® was ready to “go to another level.” He thought it was great that the brand was helping families live in their own HappyHome™, but he realized it was born to also help the planet in a much broader way. He brought on Arte Maren, who has more than 50 years of experience as an executive coach for professional organizations, franchises, and private companies and corporations, as CEO of Philanthroinvestors, Inc.

“We decided to expand and said, ‘OK, we’re going to go more into different areas and help the planet,’” Anz said.

Anz and his team see the Philanthroinvestor® identity as the solution to a lot of the planet’s problems that need to be addressed. He believes people who can invest money and time while engaging emotionally to promote human welfare while still earning returns can make a big difference.

“Planet Earth can be re-imagined and reorganized toward a far greater ideal; wherein every family will live in their own HappyHome™, where individuals eat organic and pure food, where animals and humans drink pure water and breathe clean air,” Anz said.

“The world is able to acquire the energy it needs without wires or electrical structures and where every functional space is creating and renewing its own energy. It is a world without illiteracy. It is a world of wellness, not disease. A world where artistic talent is recognized and developed. A world in which individuals respect their money as a tool to create an ideal planet and do not throw it away in speculation or gambling, a world where true financial freedom is brought about with knowledge, engagement, fulfillment and high purpose. That’s something we need to conquer before going to Mars.”