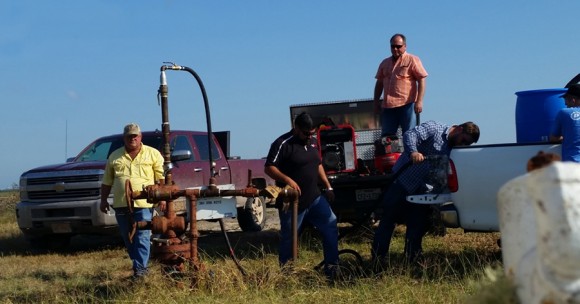 Cobalt is a developer of oil and gas technology and remediation solutions based in Houston, TX. OriginClear licensed its Advanced Oxidation (EWS:AOx™) technology to Cobalt, and, through a wholly-owned subsidiary, has a significant membership interest in Cobalt. Cobalt’s process produces a liquid that can significantly improve oil recovery, reduce corrosive gas in the crude stream and increase overall ROI for operators.

Known as H2S-Neutralizer™ (H2S-N™), this injectable liquid has demonstrated a dramatic improvement in oil recovery ratios, as evidenced by a stable increase of well-head pressure. In addition, H2S-N has been shown to significantly reduce hydrogen sulfide (H2S) concentration in the crude stream.

“In the first field trial we did with H2S-N, we were able to increase wellhead pressure in a gas well from an unstable 20 psi to an average 40 psi for a six-month period, said William Germano Jr., Co-founder and Manager of Cobalt Aqua Control. “Working with OriginClear will help oil and gas operators get more value out of their production, with minimal environmental impact.”

In addition to wellhead pressure testing, other tests were performed with crude oil contaminated with hydrogen sulfide, a highly corrosive gas that helps cause crude oil to become “sour” and lose value in the market. In field tests, hydrogen sulfide was measured from a 200 ppm concentration down to Below Readable Value (see pp. 5 and 6 the lab report).

“The market imposes a penalty for sour crude of about 13 billion US dollars annually,” said Jean-Louis “JL” Kindler, President of OriginClear Technologies. “With oil prices still very low, producers are eager for any solution to the problem. Cobalt has an innovative approach of selling liquid, which generates a recurring revenue stream. We are delighted to be partners in this venture!”

Reducing hydrogen sulfide in crude oil can not only improve the value of crude by 8 to 10%, but also worker safety and logistics, because containers and pipelines require frequent maintenance when used with crude oil contaminated with as little as 5ppm of H2S.

OriginClear first announced in November of 2015 that its proprietary electro-oxidation technology can effectively remove 96 percent of bacteria and 97 percent of hydrogen sulfide (H2S) from produced water, without chemicals. Results were reported after lab and field testing on produced water from the Eagle Ford shale, and further validated in the recent Cobalt tests.

Cobalt Aqua Control is now ramping up to commercial production and is taking orders. Interested operators and service providers are invited to email Mr. Germano at bill@cobaltaquacontrol.com, or to telephone him at (832) 630-0393 for an immediate quote.

“Sour crude oil will have greater than 0.5% sulfur and some of this will be in the form of hydrogen sulfide… It is more common in the Gulf of Mexico, Mexico, South America, and Canada. Crude produced by OPEC Member Nations also tends to be relatively sour.”