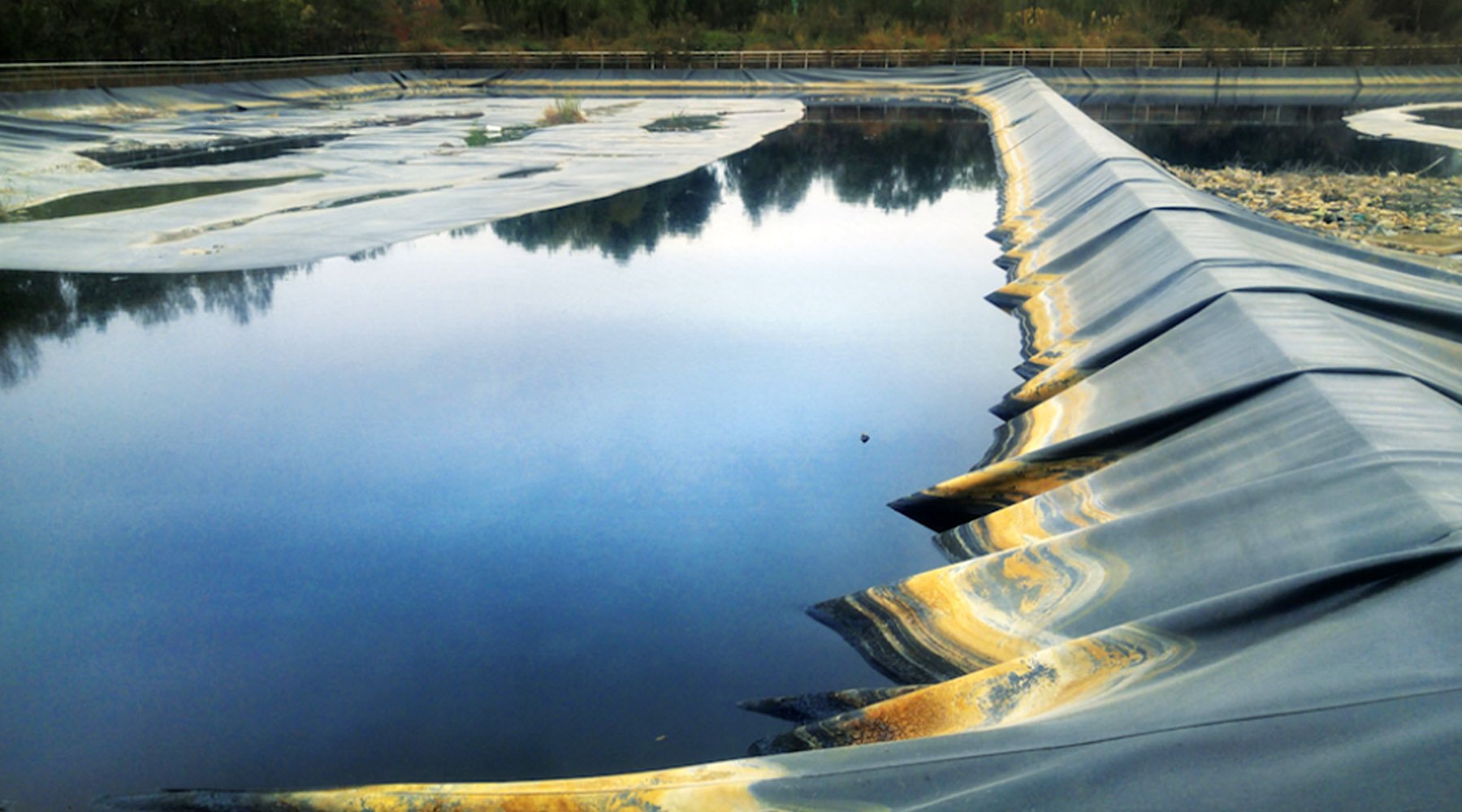 Landfill leachate, or “black water”, which is created when rain or ground water percolates through the mass of mixed municipal and industrial waste in landfills, has come under new China EPA water discharge standards. The country has implemented new rules for discharge and is funding the effort to modernize the methods and systems for handling this effluent. Mainstream treatment solutions for landfill leachate in most cases include the use of biological processes. 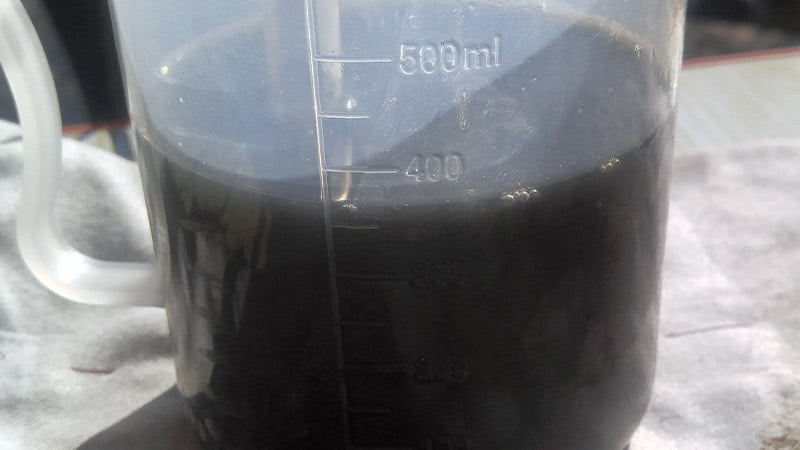 These processes are indeed efficient and economical when treating low to medium organic contamination loads in relatively stable quality wastewater streams such as municipal wastewater, but also show their limitations in terms of long term efficiency and cost when applied to leachate treatment. Chinese authorities, agencies and industry stakeholders in China and other countries are actively looking for alternative solutions to the treatment of this effluent, which is one of the most highly contaminated, and highly complex, industrial effluent.

It is a fast, versatile, low maintenance process using electricity combined with a relatively small, optimizing quantity of simple chemical additives, such as NaOH, whose component atoms are part of, and vanish with, process reactions.

In China, OriginClear cooperates with local engineering firms to propose integrating EWS:AOx in sequence with downstream treatment solutions, resulting in a complete solution. The firm and its partners have conducted a series of demonstrations and tests in East Asia to further confirm that the process can and does address landfill leachate treatment issues, while also defining process parameters for full size commercial systems.

This in turns allows us to estimate the operation’s financials, both as to Capital Expenditure (CapEx) and Operating Expenses (OpEx). CapEx being subject to system size and manufacturing conditions, we chose not to discuss this point here, but we estimated an average OpEx based on the process parameters defined during these various tests.

The goal for this initial demonstration was to reduce COD from 10,000 to 100 and Ammonia (NH4) from the mid 3000 ppm to below 8. The user considered current technology (DTRO membrane) as not effective and costly due to the high rate of replacement cartridges.

Our mission was to show proof of concept of technology in a flowthrough scenario, live and in real time. At this point, neither CapEx nor Breakthrough water cleanup technology © 2016 OriginClear™ – licensed under CC BY-ND OpEx was considered, but obviously would come into play should the demonstration show EWS to be a viable technology.

The demonstration site is in a rural northern China city landfill. Leachate discharge is 2000 tonnes/day, with very few amenities. The site is remote, with sub-zero temperatures in winter. 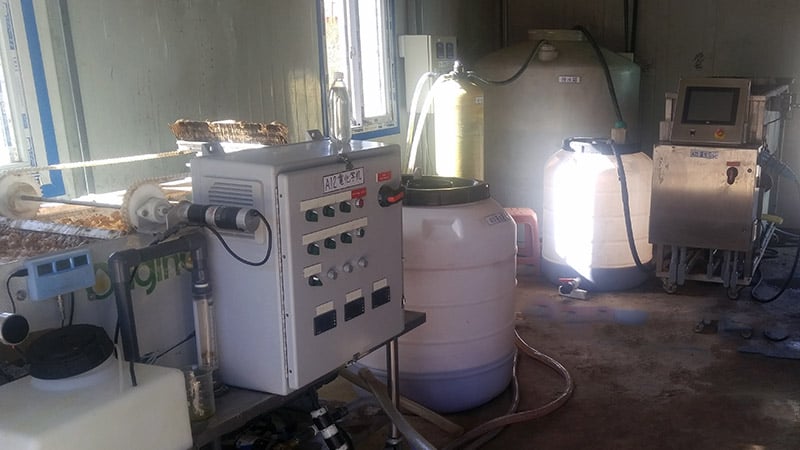 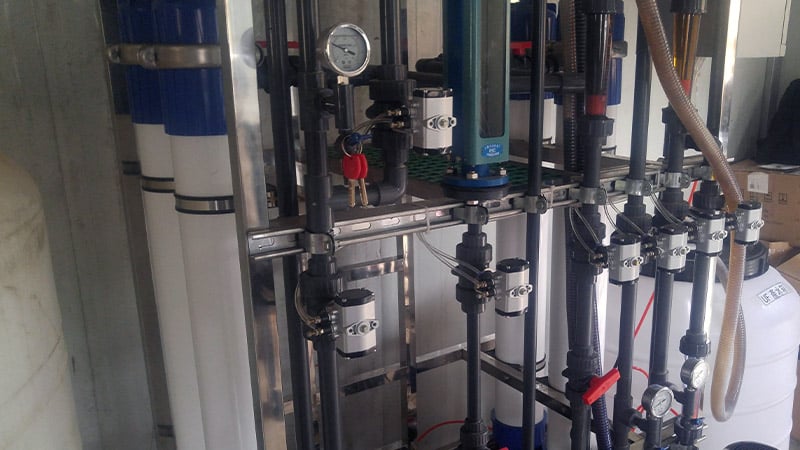 Process sequencing was established over a period of seven days. The flow rate was set at approximately 12 liters per minute, to match the nominal capacity of the AOx module.

• Added FeSO4.7H2O (Iron(II) Sulfate Heptahydrate), dose 1,000 mg/l to influent water mixed in holding tank
• Further action was to add NaOH to raise pH in holding tank to 10. Visual extreme flocculation and black product coming out of solution.
• Started the A25 flotation unit. Only MMO flotation electrodes were used. Power readings of 4.6 V and 59 A. 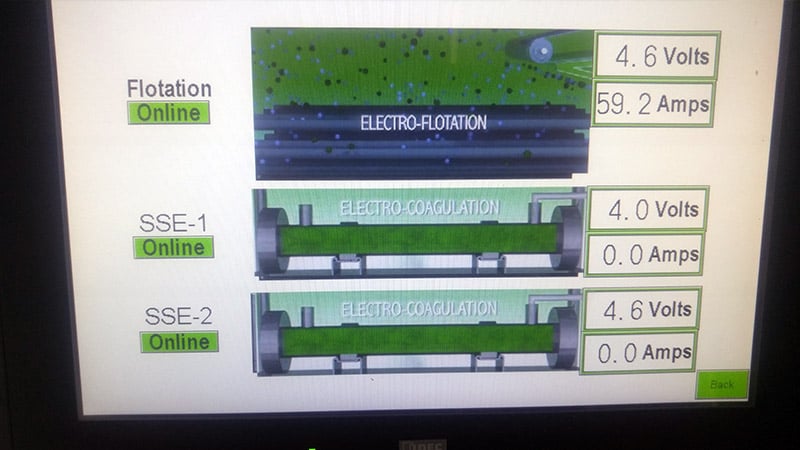 • Visual inspection of the floc: Floc and harvested mat
• Flowed through UF to clarity
• Flowed to A12 Advanced Oxidation unit with pH of 8.7: injected HCl in solution down to 6.5 pH.
• Product then flowed to UF again
• Product flowed through R/O for polish 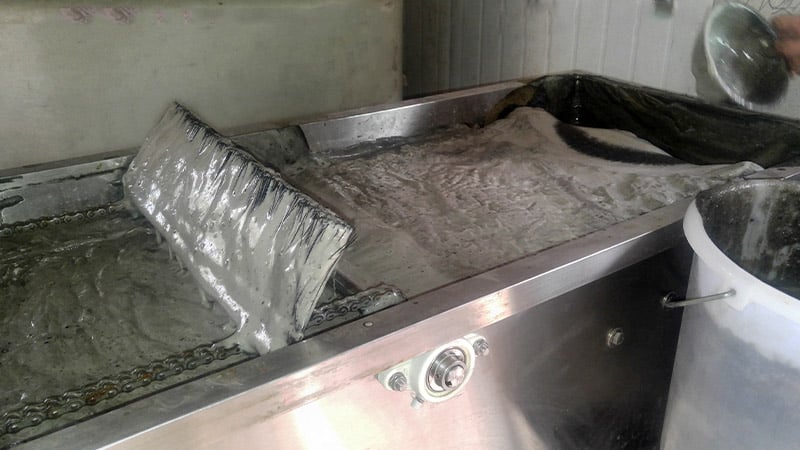 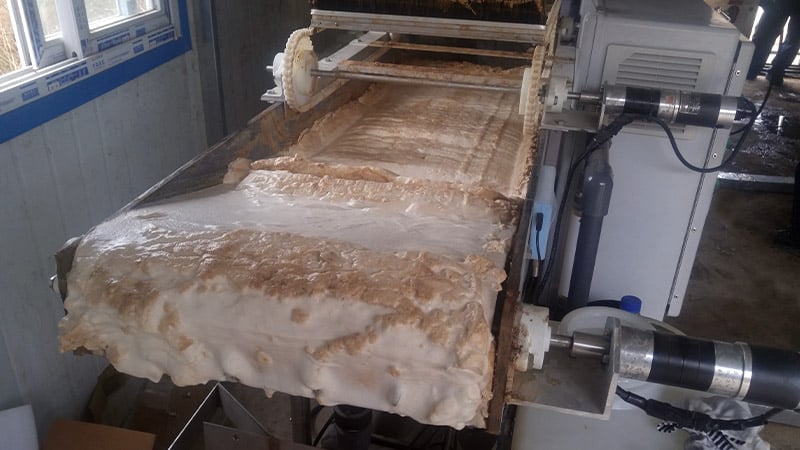 A12 AOx With Additional Precipitate Removal

There were 2 stages of UF and while these did not contribute to our numbers, they appeared to assist with the process by removing remaining trace TSS: 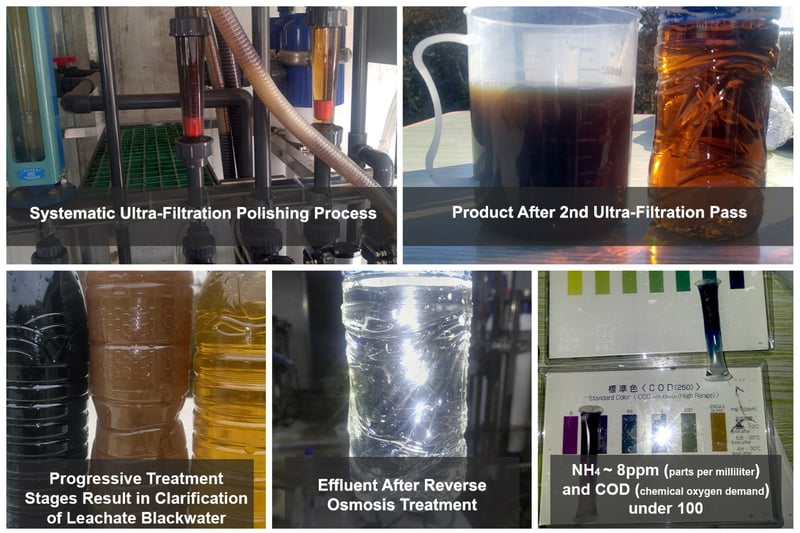 The machines used in this initial pilot demonstration were converted algae harvesting equipment, normally used for a very specific organic load, namely, mostly TSS at maximum levels of 3,000 mg/l. Also, due to construction constraints, the residence time in AOx module was Breakthrough water cleanup technology © 2016 OriginClear™ – licensed under CC BY-ND limited to 15 minutes, which, while being quite sufficient for moderately contaminated effluents, is in most cases below the usually required time for COD/BOD levels above a few thousand ppm.

Despite these limitations, the EWS:AOx™ modules chain has clearly demonstrated its ability to abate the major contamination factors that can be found in landfill leachate, as shown in the table above.

The composition and contamination levels of landfill leachate, like the Municipal Solid Waste where it originates, significantly change with each site’s geographical location (local food culture, recycling habits, etc…), as well as landfill age. Further to this initial on-site demonstration, several test campaigns have been arranged using leachate from various sources and ages, to assess the versatility and ability of EWS:AOx™’ to handle this influent variability.

For ease of handling, subsequent tests were done in EWS:AOx lab cells, each module cell having a batch treatment capability of 4 liters.

Background information such as third party lab results, experimentation photos and other data are available upon request. The most significant results are summarized in the table below:

Due to the high variability in composition, treatment methods as well as local discharge requirements, little information is available on landfill treatment costs. However, the table above 1 suggests a marginal cost bracket between US$ 8.91/m3 (MBR or CAS to POTW) and US$94.5/m3 (CAS+RO to local discharge). Interviews with endusers in China suggest that existing leachate treatment OpEx range between US$10 and US$15 per tonne.

The major operating cost factors of EWS:AOx are electricity, and the appropriately optimized pH adjustment and coagulation enhancement additives. While the present document does not claim to be exhaustive and reflect an exact comparison with the cost figures given above, field and lab tests added to other experiments realized with different wastewater feedstocks suggest the following total operation costs:

*Some feedstocks may require a higher energy use

EWS:AOx™ shows promise in remediating not just leachate, but any industrial wastewater with a high contaminant load. The combination of reactor tubes with high shear and contact zones, Electro-induced flotation and Advanced Oxidation demonstrated its efficiency not only as a stand-alone system, but also for reducing the load on polishing systems such as membranes or Reverse Osmosis units. Separate tests have pointed to a significant reduction in membrane fouling.

Construction engineering is currently exploring options for retrofitting existing flotation units, as well as responsive residence time and Breakthrough water cleanup technology © 2016 OriginClear™ – licensed under CC BY-ND energy input combinations to enable AOx to adapt to contamination load variations over long periods of time. Additional studies will also address the optimization paths for enabling synergistic interactions between EWS:AOx and complementary modules, to efficiently address the removal of TDS or other specific contaminants, that may only be partially removed by EWS:AOx.

OriginClear licenses its proprietary technologies to forward-looking and innovative technology companies and offers a limited number of exclusive partnerships to proven water industry professionals that are driving the advancement of solutions and water treatment systems to fill the urgent need of the people of our planet for clean and reliable water. Find out if your company or operation qualifies to join our Water Tech Network. Become part of the team that operates Above and Beyond Clear Water™. Complete the form at bottom of page HERE.