AOxPlus is a proprietary method to produce hydroxyl radicals in large quantities to treat highly-contaminated wastewater.

In today’s era of steadily worsening states of water and disease generating or even fatal contaminants, AOxPlus “air breathing” contaminant reduction technology, is a significant technical breakthrough with a wide range of applications.

The highly-reactive hydroxyl radical (•OH), delivers more than twice the oxidation, or cleansing power, of chlorine, without the toxic byproducts.

Based on laboratory testing, OriginClear engineers estimate that the new AOxPlus can produce roughly 10,000 times more hydroxyl radical molecules than the original AOx technology, which primarily outputs free chlorine. The two technologies can be used in tandem to deliver the one-two punch of chlorine and hydroxyl radical molecules, for class-leading contaminant breakdown.

To generate these new levels of hydroxyl radical in AOxPlus, the OriginClear research team used a special air-breathing membrane in a new reactor, disintegrating hard-to-remove contaminants. AOxPlus does not require chemical injection, or clear water (as with Ultra-Violet or UV), and is highly cost-effective when compared with, for example, diamond electrodes. It can offer a more efficient treatment solution to sectors that produce highly-contaminated wastewater, such as the pharmaceutical and food industries.

An important aspect of the AOxPlus technology is its scalability, which distinguishes it as a stand-alone water purification technology which can be applied to remedy most of the “invisible poisons” complicating the treatment of publicly consumed commercial, industrial and municipal water.

Depending on the application requirements, AOxPlus can be implemented in tube-shaped inline Advanced Oxidation Reactors or in an Advanced Oxidation tank – or in combination – both featuring OriginClear’s trade-secret reactor designs.

AOxPlus is so elegantly simple that it can be reduced to two components, a transmitting cell and an electric current. However, due to its solid scientific technical grounding, the basic formulas and theoretical principles of AOxPlus are equally sound when applied to applications on commercial, industrial and municipal scale. This factor enables a wide scope of uses for AOxPlus.

“What we call persistent organics compounds (POCs), are difficult to oxidize by an oxidizing molecule such as chlorine or hydrogen peroxide, so we produce and activate this hydrogen peroxide inside the reactor, which then are further converted into OH radicals. These OH radicals instantly react with the compounds and mineralize them to carbon dioxide, water and carbon. 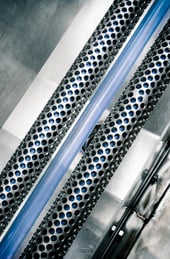 AOxPlus™ is based on a historic scientific breakthrough known as the Fenton process, developed in the 1890s by Henry Fenton, which is very well known in the science world and academia as the fundamental theory and technology governing the production of OH radical molecules (the most powerful oxidants that can be found in water). It involved the mixing of hydrogen peroxide and ferrous sulfide for the production of these hydroxyl radicals. These reactions invariably take place, but slowly.

However, unlike the synthetic Fenton process whose scientific advancement has not kept pace with or been developed in the atomic and digital technology age and involves the potentially dangerous employment of hydrogen peroxide and ferrous sulfides, the AOxPlus water treatment module utilizes an organic electrolysis process to generate hydrogen peroxide inside the cell. This hydrogen peroxide will then react with iron, also released inside the cell, to produce extremely high levels of hydroxyl radical molecules, known as the superior purifying agent for waterborne microbiological contaminants and toxins.

AOxPlus introduces no additional hazardous element in the water. It is a major benefit for operators wanting to avoid HAZMAT logistics issues, not only when having to treat the concentrated waste, but also because there is no need to bring in and inject oxidants such as Hydrogen Peroxide, as is often required in conventional Fenton-based Advanced Oxidation processes.

Due to growing concerns over cancer causing waterborne micro-contaminants such as Bayer-Monsanto’s Roundup® that are commonly found in municipally provided water supplies and are not easily removed by ordinary processes, OriginClear’s AOxPlus technology has become a potentially high-demand solution to advanced disinfection problems.

The nature of its genetically altered, synthetic chemical composition make Roundup and other similar manmade toxins and complex contaminants extremely difficult to remove from water sources. However, they can be “reacted out” with electrically produced hydroxyl radicals, which ionically and chemically decompose this class of extreme bio-toxins. AOxPlus oxidizes the contaminants in water at such an extreme level that it destroys all bio-toxic water contaminants. AOxPlus generates at one level free chlorine and at a much higher level, AOxPlus generates a significantly more oxidizing, denser cloud of hydroxyl radicals, or •OH.

This characteristic of the AOxPlus unit’s “air-breathing” and hydroxyl generating extreme oxidation technology has forecast the development of a household and small commercial use add-on product to supplement and augment smaller scale water treatment systems. This AOxPlus add-on, now in development, could provide a reliable micro-disinfection unit, that destroys this “Roundup class” of malicious bio-toxins, and be sold into the home water system installer network in America.